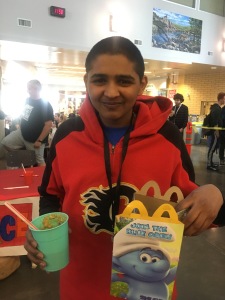 We had a successful lunch time activity at Centennial this week.  For the week before we advertised in the school and on Social Media that there would be free McHappy Meals in the cafeteria next Wednesday.  To further promote, on the day before we had four leadership students eating McHappy Meals in the cafeteria.  The table was set in the middle with caution tape around and a beautiful table cloth.  Lots of students kept coming up and asking what was happening.  On Wednesday they found out that four people would get free McHappy Meals but the catch was that they were put in a blender first and then served in a cup.  It is important to make sure that students know that the food is blended before they volunteer.  That way no one feels pressured to do something they didn’t sign up for.  We declared the winner as the student who drank/ate the most after 2 minutes. Prizes went to everyone who participated and they got to keep the toy!  Give it a try.  Good luck!

My mom / Grandma D has great taste - Oilers up 2-1 Let’s Go Oilers!!! #battleofalberta
Presented at a Student Leadership conference at UofLethbridge. Met these all star Chinook HS Coyotes from Lethbridge. Great to meet some fellow Coyotes. Thanks Rick Gilson for the invite! #goyotes